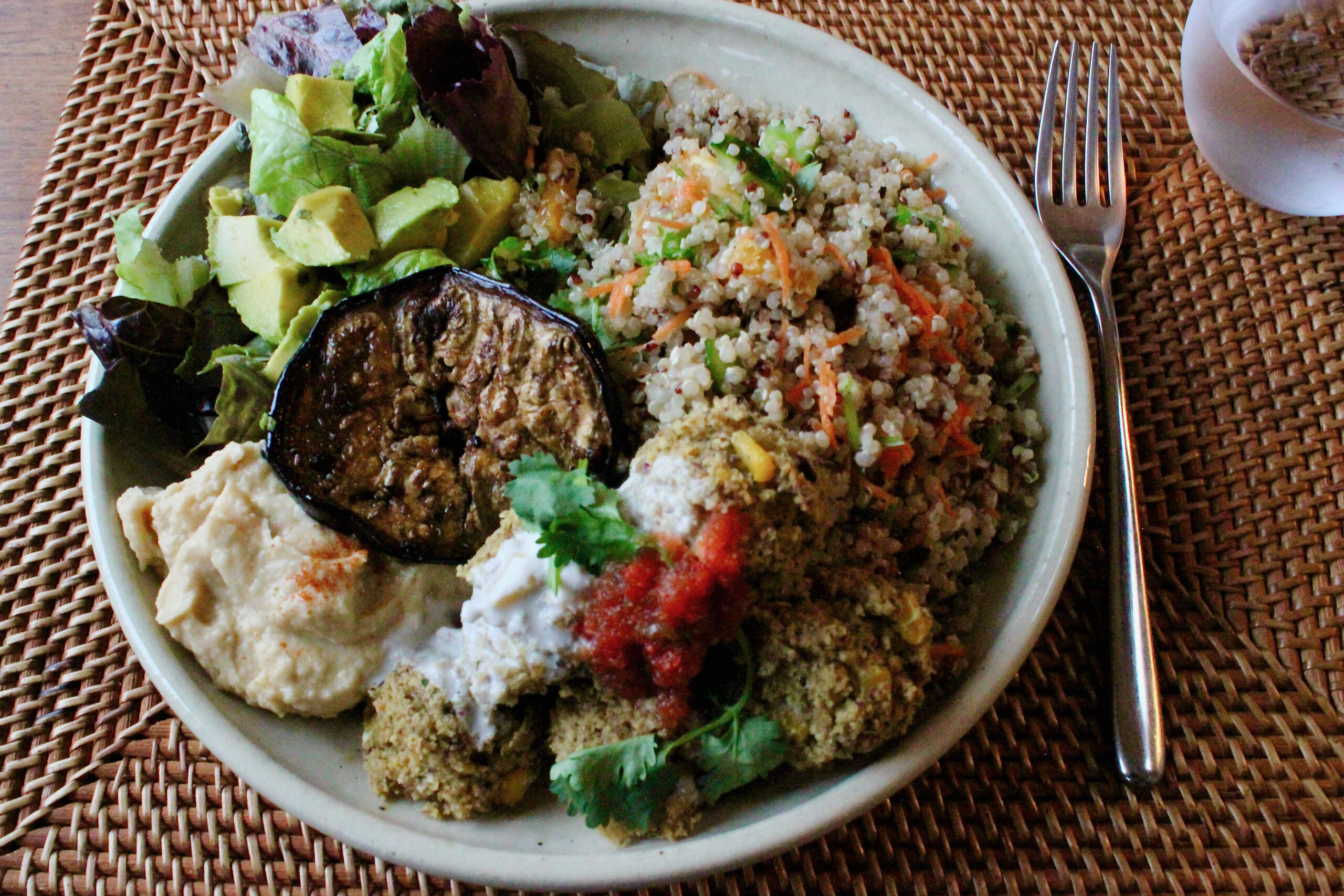 While making a big batch of humus a few days ago, I began to fantasize how delicious and fun it will be when I make a Mediterranean-inspired dinner feast sometime during the week. It is really “inspired,” which is far from authentic. But creative and delicious, I promise.

The beautiful, delicious, and unique culinary culture of the Mediterranean gave me inspiration to come up with some creative idea for dishes: Hummus is getting ready. Instead of the delicious eggplant baba ghanoush dish, I have marinated eggplant in the fridge. Let me then soak more chickpeas and sprout them so that I can make the baked falafel, which is an absolutely delicious and healthy, authentic falafel modulation. And instead of tabbouleh, let’s make quinoa salad, using the fresh vegetables and herbs I have in the fridge. So, after a few days of this initial inspiration—soaking and sprouting the chickpeas—here is the menu I have created for this feast.

As you can check the recipe for my baked falafel here, I am going to write here only about the topping. Oh, putting my homemade coconut yoghurt and fermented hot sauce on top of the falafel and enjoying with fresh cilantro was heavenly! Although I put some cilantro also in the falafel mixture, I love adding the fresh one on top, since the aroma and flavor of it doesn’t come through as much due to the heating process. You can certainly use fresh parsley instead of cilantro, or even both, but I love having cilantro as a garnish, since it adds so much beauty to the aroma and flavor.

Inspired by tabbouleh, which is made with bulgar or couscous, I wanted to make a cooling grain dish with the quinoa which is higher in nutrition and also gluten free. Since we didn’t have the ingredients of traditional tabbouleh—tomatoes, cucumber, parsley, mint, and lemon juice—, I came up with some vegetables and fruits to mix with quinoa which added beautiful colors and flavors—cucumber, finely shredded carrot, cilantro, orange, and lemon juice. This has come quite far from tabbouleh, but it was very delicious.

Cut cucumbers into small pieces and massage with salt. Peel the orange and cut into small pieces. Same with the cilantro. Put the quinoa (room temperature or cooler) into a large bowl, add cucumber, orange, and cilantro, then squeeze in the lemon juice and grind some black pepper, sprinkle cayenne pepper, and mix all together. In the meanwhile, you have finely shredded carrot mixed with salt and lemon juice, and marinated. Add it into a large bowl and mix together with the quinoa salad. The saltiness of this quinoa salad is only from the cucumber and carrot which were mixed with the salt in advance. In this way, the salad is not too salty, which is perfect as we eat with other well-flavored dishes. Squeeze in a good amount of lemon juice which will make this salad so delicious and refreshing. And the orange in the salad definitely brings additional beauty into our taste pallet.

Just simple green salad with delicious local Fuerte avocado. At the same time, today, for dressing, I used the leftover hot sauce brine along with flax oil, which was truly a perfect idea! It fit so well with all the other dishes. Hot sauce brine can make an absolutely delicious dressing!