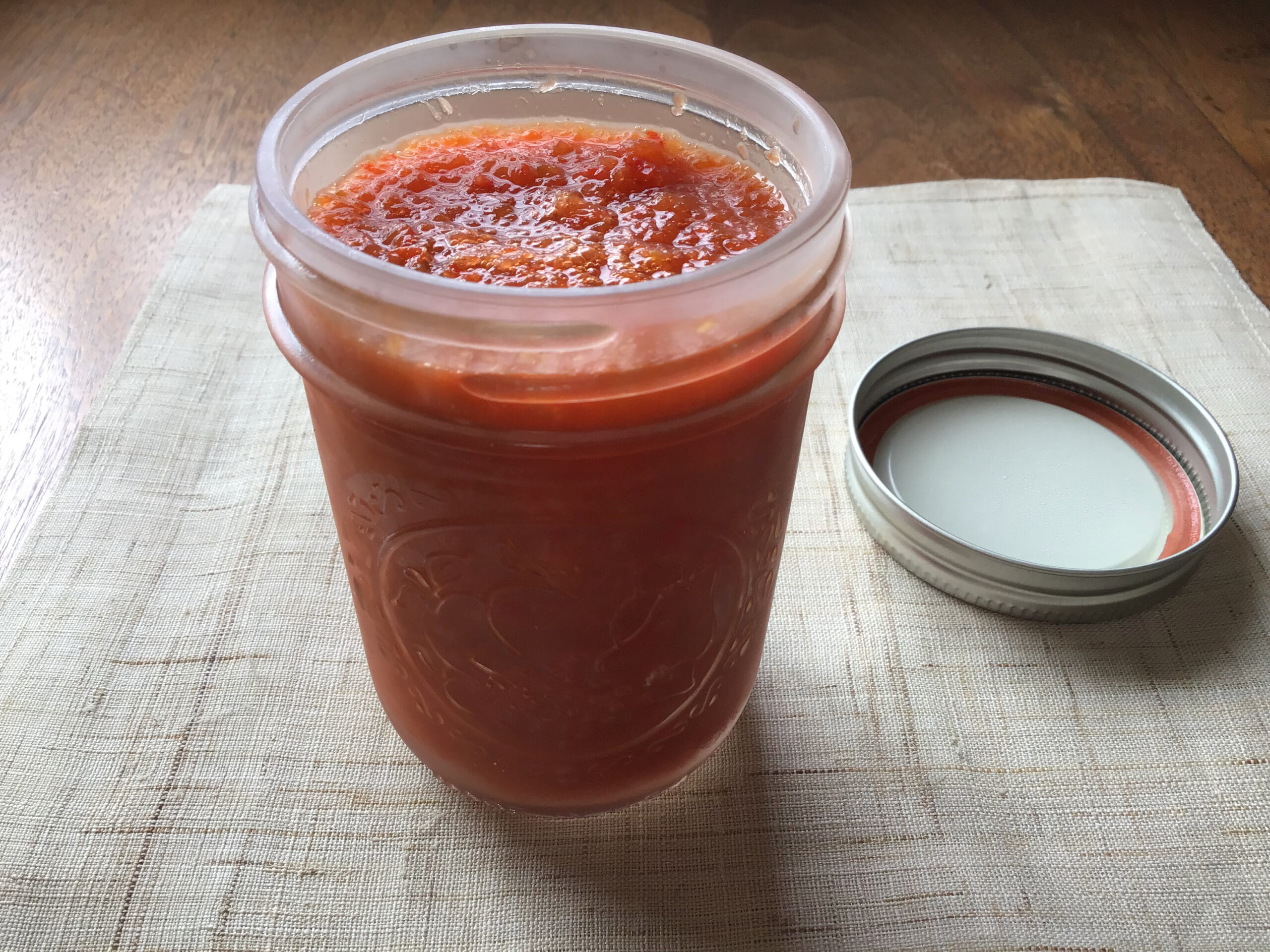 When I was living in Norway, my dear friend Elisabeth introduced me to a fermented hot sauce recipe on a particular blog. I was curious, and yet I had not gotten to make it until last year, once I moved to California. Here in the summertime at the farmers market, you can buy different fresh hot peppers from organic farmers. What a great opportunity for me to make my own hot sauce now, combining the peppers I want to use.

There is red hot sauce and green hot sauce, just as there are red and green hot peppers. This time, we got a mixed variety in color as well as strength. For the recipe, I referred to the blog mentioned above, yet I made some adjustments. For example. I skipped the turmeric and seaweed. Also, I added a little more red onion. But more importantly, I didn’t use any fermentation crock, weight, or other special equipment to make it. It is possible! So, I want to share with you here so that you can start making your own fermented hot sauce just with a regular jar.

If you want to make homemade sauerkraut, you probably want to get a fermentation crock. It’s worth it, since you can make it in a larger amount and it ensures success without the sauerkraut becoming moldy. And there is nothing like homemade sauerkraut which is so delicious, much more economical, extremely healthy, and on top it, you can get creative and make your own version by mixing in various herbs and spices! But if you are only wanting to make a small batch of fermented food such as fermented tomato sauce, water kimchi, or hot sauce, you can make it with the regular jar you have in the kitchen. The most important thing, though, is to sterilize the jar thoroughly, and the jar needs to be able to seal tightly.

How do you ferment the hot sauce with a jar?

I did this in the same way I make fermented tomato sauce, for instance. I put all the ingredients together in a jar and seal the lid. Then I open it twice a day, in the morning and evening, to stir the ingredients. Introducing air into the contents will allow the sauce to ferment more efficiently. Be sure to close the jar tightly once you finish stirring, otherwise it can potentially bring on mold. With tomato sauce, I put it immediately into the fridge once it starts to actively bubble. But with the hot sauce, I will leave it on the counter for a few more days, like I do with the enzyme juice, to allow the bubbling (fermentation) activity to further advance. Then there comes a point when the bubbling gradually slows down. That’s the moment I take the ingredients out, blend them, pack in the smaller jars, and store in the fridge, ready to be used.

Vinegar is a key ingredient for making hot sauce! It transforms the flavor beautifully into further richness, and it helps to also preserve it. I like adding apple cider vinegar, which is also made by the fermentation process. The sweetness of the vinegar will bring delicious complexity into the sauce. Good thing to remember is that the ratio of the vinegar is 20% of the entire sauce. When you know this ratio, you can adjust the thickness of your sauce (ratio between the brine, other ingredients, and vinegar) always to your liking!

How to sterilize jars

What is your method to sterilize the jars? I used to do it with boiling water. And I still do if I need to sterilize a small jar or two. But if I want to sterilize large or many jars, I use the oven, which I learned from my mother-in-law and find such a brilliant way! Sterilizing large jars are tricky if you don’t have a really big pot. In the oven, you can even sterilize many big jars at once!

I usually plan the process according to when I am going to use the oven in order to conserve energy. Since I probably use the oven at least once a week to bake my bread, crackers, or other dishes, I have the jars that I want to sterilize lined up by the time I use the oven so that I can use the remaining heat, instead of heating the oven only to sterilize.

It is such a simple procedure. You leave the jars in at around 220F and keep the temperature steady for 20 minutes. Then you turn off the oven heat and let the jars cool down inside.

After using the oven, it is time for me to start my fermentation process. Sometimes, the timing doesn’t work, but at least, this is how I am trying to schedule as much as possible. Less use of energy, more friendly to our planet!

The deliciousness of homemade hot sauce!

I was never such a fan of hot sauce until I made my own! In fact, it’s so delicious that I have decided to make many jars this year so that we can have enough to last until the pepper season next year. Delicious and healthy food is a true blessing, and this hot sauce is definitely one of the examples. Not only does it add such beautiful flavor to the dishes, but also it promotes the health of our gut because it’s probiotic!

I am having much fun and joy in adding this magical sauce in various dishes I make. It adds wonderful flavor to the dishes. We were savoring Mexican-Japanese rice bowl I made the other day, for instance. I also want to make same vegan tacos I made at “Vegan Taco Feast!” and try with this hot sauce.

Save the brine for various uses!

Even the brine! You can save and use for dressings, sauces, or pate. Its aroma, spiciness, and fermented flavor adds wonderful depth. There are so many creative possibilities. I added the brine to my hummus the other day, and it was also absolutely delicious!