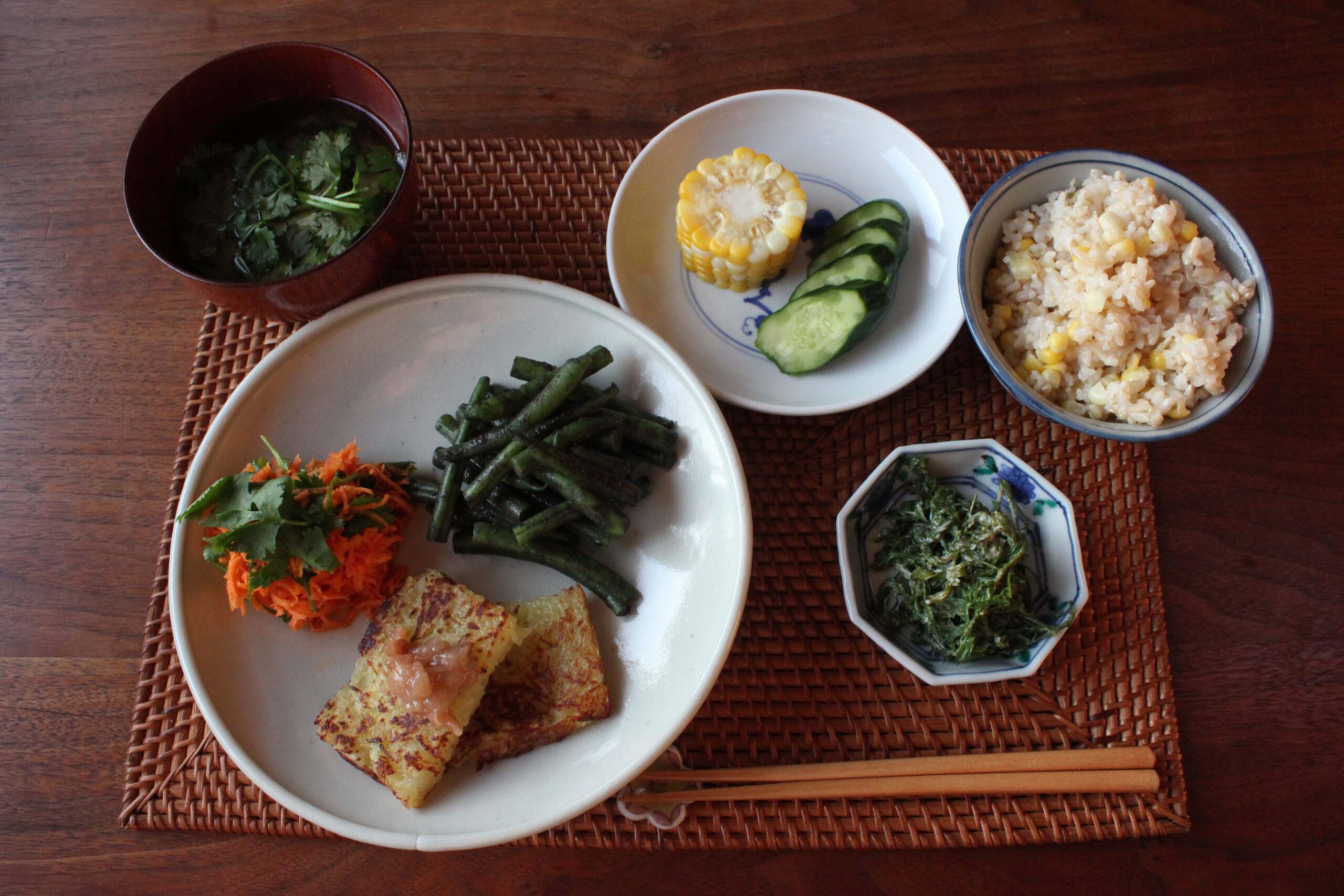 Since the corn season has arrived, besides eating it simply as boiled corn on the cob, I have been making delicious raw corn-cucumber soup, which is one of the delicious and delightful soups of the summer. And yet, there is another dish which I love to make that I had not yet done, which is corn rice! It is very simple, as I just have to cook the brown rice and corn together, but it is so delicious, as the broth from the corn and the corn cob itself brings such a lovely sweetness into the flavor of the brown rice. For today’s dinner, I have composed a menu with vegetables all of which go beautifully together with the corn!

They are a match made in heaven in this summer season. Such a simple idea, but the flavor of the rice transforms so beautifully with the corn’s sweetness. The key is to cook the rice not only with the corn grains but also together with the corn cob. Corn cob can make such delicious broth (read more about it here).

As always, have the rice rinsed and pre-soaked for at least 8 hours prior to cooking. (To learn how to cook delicious rice, visit the article “The Essentials of Cooking Rice.”) Cut the corn off the cob and have them both ready for cooking. Combine the rice, soaking water, corn, and corn cob together and cook. It’s this simple.

For this dish, I used Le Creuset’s grain pot, instead of the usual pressure cooker. In the warmer season, it is good to take a break from the pressure cooker, at least from time to time, so that we won’t introduce too much heat (yang energy) into the body. But also, for this rice, it is more delicious when the rice is a little pearly and not too chewy. Le Creuset’s grain pot is perfect since it can still break down the hard fiber of the rice grains well, making it easier to digest. For that purpose, you can of course use other enamel coated cast iron pots, such as ones made by Le Creuset or Staub. And if you don’t have those, a stainless pot is also fine. An earthenware grain pot would also definitely have been another ideal pot to cook rice in the summer season, but I chose Le Creuset’s grain pot, since the earthenware grain pot is not common in the West.

For today’s broth, I used the water which boiled the corn and string beans, and it worked perfectly. Although it is not exactly the same as corn cob broth (read more about delicious corn broth here), you can get quite a good quality of broth through boiling the corn, too. You don’t get really a broth by boiling the string beans, but I used the same water that I boiled the corn in so that I didn’t have to use extra just to boil the beans.

Mix the broth with miso and let simmer for a little while. Serve in the bowl and add washed, pre-soaked, cut wakame seaweed as well as some cilantro for garnish. It was a simple and beautiful summery miso soup.

This dish was my invention. It is perfect for a warm sunny day. Potato as a night shade vegetable has a strong yin (cooling) energy. And this dish is surprisingly delicious! Crispy surface, uniquely chewy consistency of potatoes, and its sweetness with the fresh sourness of umeboshi. I don’t know what better combination there could be.

This dish shows how versatile a texture potato has. It is quite different from the texture we experience when we boil or bake potatoes. Due to the high content of starch, when shredded, potatoes can bind very well together and become a batter without needing any other ingredients. And when it is shredded finely enough and the batter is being heated on the pan with enough oil so that it won’t stick, it becomes a lovely chewy pancake! It is quite different from German “Kartoffelnpuffer,” Irish “boxty,” or Jewish “Latkes.” First of all, there is no other ingredient than potatoes in my recipe, whereas these traditional Western potato pancakes are made with eggs and sometimes also with flour. But also, since mine is so finely grated, when you eat it, you don’t feel those shredded potato pieces as much, and they all become more as one chewy texture which feels very soft and gentle. Japanese people love chewiness in texture. Perhaps that’s the reason why I find this potato pancake so special. But my husband was also praising this dish throughout the entire meal!

Shred the potatoes finely and squeeze to drain the liquid. Pour the oil on to a pan, and heat the pan. Once it gets heated enough, put the shredded potato batter into the pan. Fry well so that it becomes a golden color, then flip. In the meanwhile, mince the umeboshi on the cutting board. Once both sides of the potato pancake become golden, it is done. Cut into desired size, serve on the plate, and put the minced umeboshi on top.

Eating with umeboshi is not only delicious, but also healthy, as it’s high in alkaline and can neutralize the oxidation of fried food!

Boil the string beans for a few minutes. Check the consistency of the beans and boil until they get soft enough, but not too soft. Basically, I boil them longer than when I make the string bean salad with lemon juice, salt, pepper, and olive oil, for which it is nice to have a slight crunchiness to the beans. Remove the beans from the boiling water, and let them cool down in the colander or strainer. Meanwhile, mix the black sesame tahini, soy sauce, and mirin in a bowl, in the ratio of 2:1:1. Once the beans have cooled down, cut them in about 2 inches length. Then mix with the black sesame tahini sauce.

This fresh salad has recently become one of my favorites. I love making carrot salad, grating it with a finer blade. It brings a more delicate feeling into the mouth. Also, it merges with the seasoning better. This salad is very simple and very delicious.

Grate the carrot and put into a bowl. Mix with 1 tsp of soy sauce and 2 tsp of lemon juice. Then add some chopped fresh cilantro, pour in 1 tbsp of flax oil (olive oil or sesame oil are other options, depending on the aroma and nutrition you want), and mix all of them gently together.