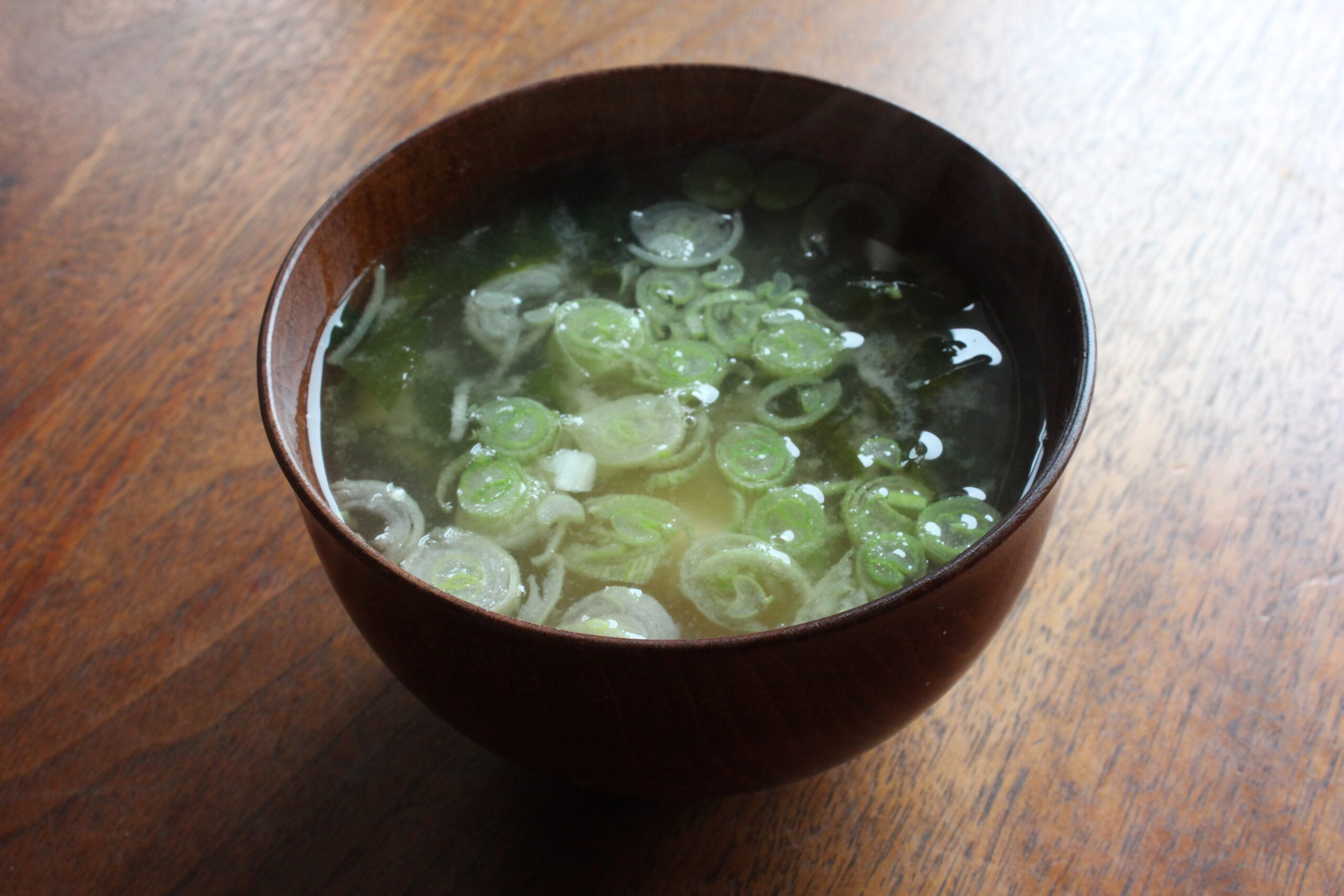 I have grown up eating miso soup for dinner almost every day. Rice, miso soup, a main dish, and some side dishes. This is a very typical Japanese meal. The smell of miso soup is grounding and comforting to me. It can transport me instantly to my old memories—the kitchen activity before dinnertime with my mother.

Living in the United States, I have learned that many people here would call miso soup just “miso.” For Japanese, “miso” is the miso paste, which is fermented soybeans, and not the soup. In fact, you cannot make miso soup only with miso. This traditional Japanese soup is made from the alchemy between the miso and dashi (Japanese broth). When the umami of the broth and miso meet, the flavor of the soup deepens and expands. When you add some vegetables, seaweed, or mushroom in the soup, the flavor becomes even richer.

For vegan miso soup, the typical broth we use is kombu broth or kombu-shiitake broth. Since both kombu and miso’s umami are glutamic acid, kombu-shiitake broth enriches the flavor even more through the guanylic acid of dried shiitake. (Glutamic and guanylic acids work synergetically.) However, I often make miso soup just with kombu broth and it is wonderfully delicious, through cooking with some other ingredients. Although it is not the traditional Japanese style, you can make miso soup with vegetable broth as well. Different vegetables such as onions, tomatoes, garlic, and root vegetables are high in glutamic acid. So, it is definitely a good alternative. When you make the broth with these vegetables and mushroom, the broth will not only have glutamic acid, but also guanylic acid, which will add further flavor to the miso soup.

You can learn more about Japanese broth in my article, “Preparing Japanese Broths.“

There are, in fact, different kinds of miso on the market. Which miso should we use to make miso soup? The most standard way is to use rice/brown rice miso or barley miso. You can also make miso soup with dark red miso. The flavor of it, however, becomes quite strong. White miso is another possibility, which will bring a light, sweet, and delicate flavor. In some parts of Japan (around Kyoto), this miso is used more commonly.

Depending on what ingredients we cook with the soup, the flavor of the soup becomes quite different. You can add any vegetables, in fact. Wakame seaweed and tofu are also very common ingredients. It is beautiful to add some seasonal vegetables in the soup to appreciate the unique time of year through the soup.

Another beautiful addition to the ingredients would be a garnish. The pungent and aromatic garnish such as spring onion, some herbs, or graded ginger can enhance the flavor of the miso soup in such a refreshing way.

This is how simple it is to make a miso soup!

An important thing is: once you add the miso, you don’t want to bring the soup to a boil any more! When the soup boils, you will lose some of the miso flavor as well as its health benefit, since the miso is probiotic.

I have introduced the way to dissolve miso with a spoon and whisk, but traditionally, we use suribachi and surikogi (Japanese mortar and pestle) for it.