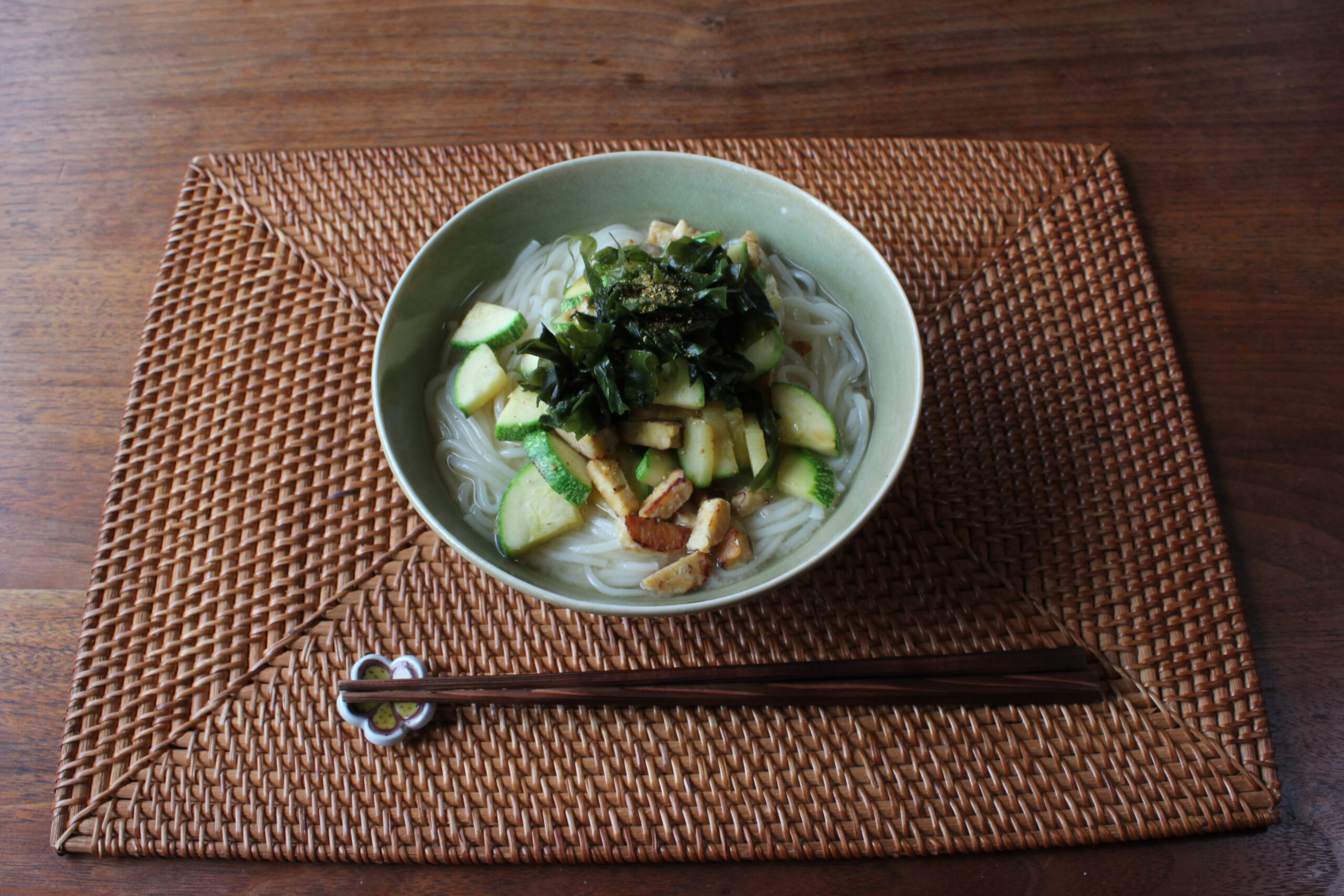 This weekend, we had quite chilly weather. Especially on such a day, I long for warm food for lunch. In fact, eating warm food for lunch is quite common in Japan. In such case, a warm noodle dish would be one of the perfect options, as it is easier to make compared to cooking grains and preparing a few other dishes.

We had udon in our cupboard from Japan. It is one of the Japanese noodles which are most often prepared for a warm meal. Udon noodles, in fact, have many different varieties depending on which region in Japan they are coming from. Sanuki udon, from Southwestern Japan, Kagawa prefecture, is known for being very thick and chewy, whereas Kishimen, which is very flat like fettuccine, is the specialty in Western Japan, Aichi prefecture. Inaniwa udon is one of the most exclusive udon noodles from Northern Japan, Akita prefecture, which are indeed my favorite with their smooth and fine texture and translucent quality. The noodles I used today are called Handa udon, from Aichi Prefecture. The noodles are rather on the thin side, which are close to the various organic udons you can get in the United States.

Living in foreign counties, I noticed that people would call the dish I make as noodle soup, and yet in Japan, we never call it as noodle soup. Instead, it is called simply warm noodle. It is because for us, this is not a soup dish, but a noodle dish. Warm noodle dishes, in most cases, are noodles floating in warm broth with some toppings. We eat the noodles and drink the broth directly from the bowl without using a spoon. And it is common that people don’t drink all of the broth, as it is salty enough that we don’t necessarily need to drink it all. I make my warm noodle bowl with a somewhat less salty broth, or make the amount of broth a little less so that we can drink a good amount. This time, I made a smaller amount of broth, because the amount of broth I had was limited, and I put on top of the noodle seasoned sautéed zucchini and tempeh for extra flavor.

As I made the delicious raw corn-cucumber soup yesterday, I was making the broth with the corn cob and keeping it to be used for today’s meal. I thought this would be a perfect usage to make the broth for udon! Corn cob broth has a beautifully gentle sweetness. I imagined this would go so well with my barley miso. But of course, to make a delicious noodle broth, we can make it with regular kombu broth and it will also be beautifully delicious. If you will make corn cob broth one day, I recommend you try making a noodle dish with it. It brings such a beautiful, seasonal, special flavor to the noodles.

Increasing the amount of vegetables to eat in a noodle dish

This is not a common Japanese way of cooking udon noodle. But because I wanted us to eat a larger amount of other ingredients than noodles, I decided to sauté zucchini and tempeh and put it on top of the noodles together with the wakame seaweed. I made four layers for this noodle: corn cob miso broth, udon noodles, sautéed zucchini and tempeh in soy sauce flavor, and wakame. Although this is not a typical Japanese noodle dish, it was absolutely delicious and felt so Japanese that my homesick heart and soul were nurtured by it deeply, and our body was warmed beautifully.