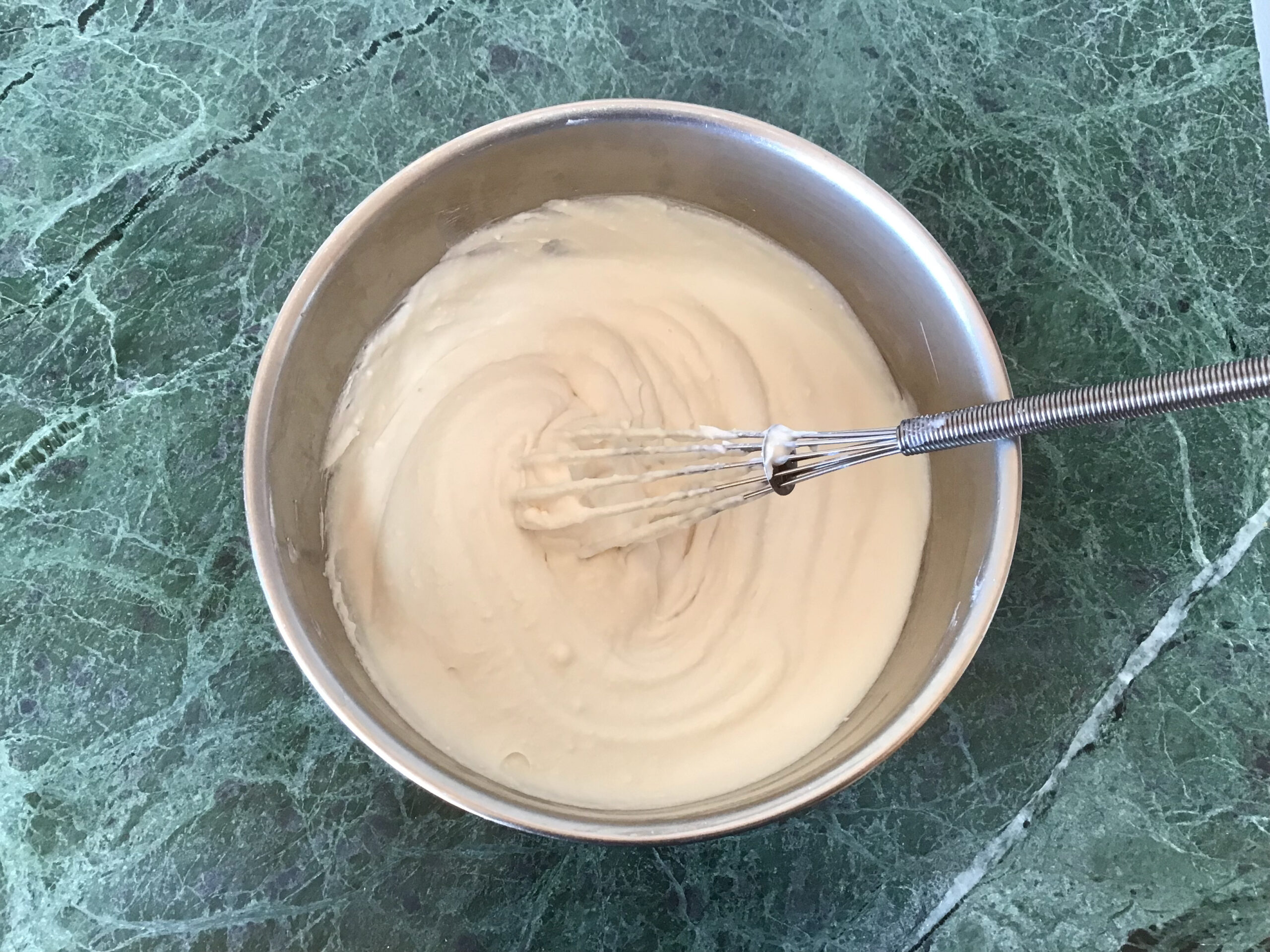 I love coconut whipped cream! Chilling the can of coconut cream, taking out the solid part from the can, mixing with the electric whisk for several minutes, then adding sweetener and mixing some more. It is so easy and absolutely delicious. When I encountered its recipe for the first time, I felt it was almost like a dream coming true to now having a possibility of making a vegan version of whipped cream, which is so different from other vegan cream that is heavier in texture. At the same time, making this whipped cream for several years, I realized that there are several needs I have that the regular coconut whipped cream cannot easily meet.

Coconut whipped cream to the next level!

Is there a way to create an even better version of coconut whipped cream that is less runny, lower in fat (possibly healthier), and that can be made without an electric whisk?

Making coconut whipped cream with maple syrup as sweetener, I sometimes experienced that the texture of the cream was a little too runny for my preference, especially when making a cake like strawberry shortcake that has layers in which the cream comes between. Also, to make a good amount of coconut whipped cream, I realized that there is quite a good amount of solid coconut cream needed. I wondered: isn’t it actually quite fattening?! And if I could make the whipped cream without any electric device, that will be so much easier.

Here is how my probiotic coconut whipped cream was born. We have been having vegan coconut yoghurt as a staple in the fridge for years. During these years, I have noticed how the consistency of the yoghurt can differ depending on the ratio between milk and water parts in a can of coconut milk. When I get the higher ratio of the milk part, the yoghurt becomes very thick, almost thicker than Greek yoghurt, whereas when the water ratio is high, the yoghurt becomes very runny. This made me realize how yoghurt culture can potentially make the coconut milk more solid. So, what if I make the coconut yoghurt using only the milk part? Can it become a base of the whipped cream, rather than using the can of coconut cream? Yes! And it worked so perfectly.

With yoghurt culture, not only has the coconut milk become solid, but also a little bubbly due to the fermentation. This would be perfect for making whipped cream that has an airy texture. In addition to that, it is less fattening and probiotic. A healthier alternative!!

Using only the milk part of the coconut milk can make a beautiful probiotic vegan whipped cream. But I wanted to realize an even more stable consistency. So, I soaked cashews in the water parts of the coconut milk and some water, left it in the fridge for a few hours, and then blended it to make a small amount of cashew cream. Then I added it to the batch of solid coconut yoghurt and let the two ferment together for a few hours in the fridge. The cream became nicely solid, but not hard, which was the consistency I was looking for. The cream is somewhat heavier than the whipped cream only with the coconut yoghurt, but this more solid whipped cream might come handy in some occasions, for sure.

Delightful taste and versatile use

As the cream is probiotic, it has some sour taste to it, and it is so refreshing and beautiful, adding different dimensions to the sweet dessert. To add more air into the cream, you can whisk it a little before using, and if you desire, with some added vanilla extract. With or without adding the sweetener, it is absolutely delicious just by itself. You can decorate the cake with it, put it in a bowl and add some fresh fruits on the top, or serve on the side with pie or apple crisp. And there are many more creative ideas using this whipped cream.